In stock: delivery in 1-2 business days

Everything about the Samsung Galaxy Z Fold 3 256GB Green

In August 2021, Samsung presented their next line of foldables, including this Samsung Galaxy Z Fold 3. Foldables, or foldable phones, are very special and offer all kinds of new possibilities for smartphones!

This Z Fold 3 has two screens: one on the front, and an extra large one on the inside. It also has a super-fast Snapdragon processor, five cameras, and 12GB of RAM.

The most important part of a foldable phone is the screen. When you have the device folded, you will find a 6.2-inch AMOLED display on the front. With its high resolution and 120Hz refresh rate, this is already a very fine screen.

The unfolded display measures a whopping 7.6 inches. This makes various actions a lot easier, such as watching films or using multiple apps side by side. There is support for an S Pen, but it is not included.

The processor is a powerful Snapdragon 888 chip. It runs all apps without difficulty and provides an optimal user experience. Thanks to the RAM, multitasking is not a problem either, so you can easily open two apps side by side.

This smartphone has five cameras in total. Both screens have a selfie camera, and the other three camaras can be found on the back: a primary lens, a wide angle lens and a telephoto lens with 2x zoom. This allows you to take clear pictures.

A big advantage of the foldable design is that you can also use the cameras on the back for selfies, making them much more clear than on other phones! The video quality is 4K.

The battery of this special device can be charged both with an adapter and wirelessly. Wireless charging is a bit faster, namely with a power of 25W. The battery has a capacity of 4400mAh, which is not that much for the large display, so the fast charging is quite useful.

The Samsung Galaxy Z Fold 3 256GB Green does not come with a charger. Check whether you have a compatible charger at home. Or order a charger.

With normal use, we guarantee that your phone will work properly throughout the full warranty period. If something goes wrong, Gomibo.es and Samsung will make sure to help you out!

How do repairs at Samsung work? 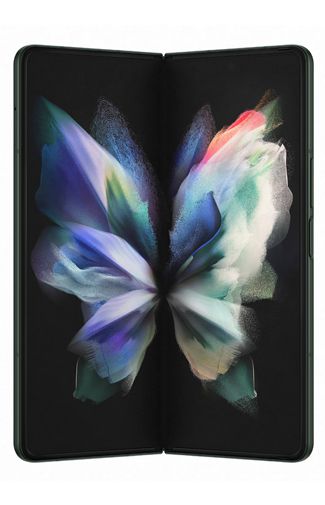