In stock: delivery in 1-2 business days

Everything about the Samsung Galaxy S10 128GB G973 White

On the 20th of February 2019, Samsung revealed their new Galaxy-line. This line is the 10th iteration of the Galaxy S-series. In comparison to its predecessor, the Samsung Galaxy S10 is a totally new device because of its new hardware, software, and design. On top of that, the device features a fingerprint scanner that isn't visible to the naked eye!

Thanks to the superthin bezels and rounded sides, you'll feel as if you're only holding a display. The front doesn't have a notch for the camera because it has been built into the display. To accentuate the design, Samsung has added a new software skin that adds convenient new features to the operating system.

The back of the S10 holds no less than three cameras. Now you can capture even more in one picture, or zoom in without losing any details. You can film in 4K quality, and the optical image stabilisation (OIS) makes sure your videos don't look jerky!

You can take selfies fast and easily with the front camera. This sensor has a wide angle, so taking group selfies is much easier. The smart software also lets you add effects like bokeh, so the object of your picture will jump out in pin-sharp focus against a blurry background.

If you're looking for a smartphone with one of the best displays on the market, then you can rely on Samsung. This year, their energy-efficient Dynamic AMOLED panel has brought them to the next level. They've also made a small hole in the display to hide the camera, so the display covers even more of the front.

The 6.1-inch Infinity Display has a resolution of 3040x1440 pixels. With this combination, you won't miss a single detail, so you can be even more entranced by your favourite film or serie!

The glass back feels very premium, and this device lies comfortably in the palm of your hand thanks to the rounded sides. The display is also slightly rounded, so the front flows smoothly into the metal casing. The casing has an IP68-rating, which means the S10 is completely dust and water resistant!

The Samsung Galaxy S10 128GB G973 Duos White runs on Android 9 Pie. The South-Korean manufacturer has added their own OneUI skin to the operating system, which provides a user-friendly interface. You'll have direct access to various Google apps, and download millions of apps and games via the Play Store!

A lot of computing power

With the Samsung Exynos 9820 chipset, you'll have more than enough computing power for the heaviest tasks. This means 3D games are no problem, and the 8GB of RAM helps your device multitask without hitches or glitches. Because the Exynos chip is very energy-efficient, you can expect a long battery life!

This device will definitely have a long battery life with the 3400mAh battery. This means you won't have to worry about your device lasting an entire day! You can charge the S10 via the cable, or wirelessly by placing it on a Qi wireless charger!

The 'Duos' part of the Samsung Galaxy S10 128GB White means there's room for two SIM cards in this device. This is a convenient feature if you prefer to separate your work and personal calls, or if you often travel to foreign countries!

This device comes with a standard 128GB of storage space. This is a lot of space that you can use to store a lot of pictures, apps, and music. Do you not have enough storage space? Then you can easily expand the storage space by placing a microSD card in your S10.

The user manual is not included but can be downloaded or viewed here: Dutch user manual. You can also download an English version: English user manual.

With normal use, we guarantee that your phone will work properly throughout the full warranty period. If something goes wrong, Gomibo.es and Samsung will make sure to help you out!

How do repairs at Samsung work? 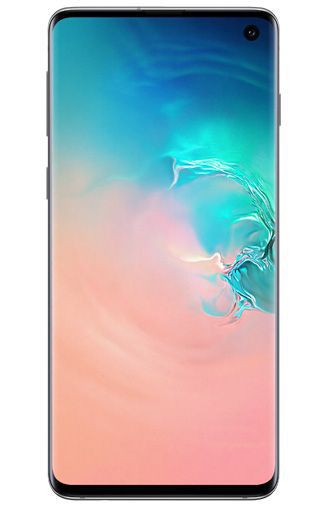